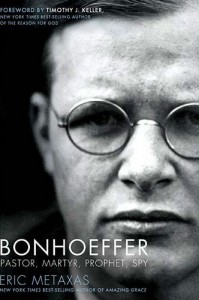 I was introduced to the book during a couple talks [1] [2] by the author, Eric Metaxas. Admittedly, I was a bit intimidated by such a lengthy, historical biography. But his stories and wit captured my interest, and thankfully he did not betray that style while writing the book.

Despite knowing the way Bonhoeffer’s life ended, I found myself eager to continue reading as the story of his life unfolded. This was due in part to the engaging writing of Metaxas, as well as the contagiousness of Bonhoeffer, himself, and the fascinating life he lived. My historical knowledge was enhanced, and my faith was immensely challenged.

From an historical perspective, I confess there were numerous aspects regarding Hitler and his ilk that I had not previously known. So, too, regarding the plots against his life by those determined to put an end to his tyrannical reign. It was sickening how the Nazis were able to use a bastardized version of “Christianity” as propaganda to win over believers in their cause.

Likewise, the helplessness of watching the church (both within Germany and without) struggle to be faithful and uncompromising was saddening, to say the least. I realize such an assessment comes from a safe distance afforded by historical perspective. Bonhoeffer was sickened by the rationalization of some leaders within the church to justify acceptance of, and in some cases support for, the Third Reich. Others within the church believed the church should avoid any involvement. Metaxas summarized Bonhoeffer’s frustration with that view when he wrote,

When the state is trying to encroach upon the church, this is a proper sphere of concern. But for Bonhoeffer, the idea of limiting the church’s actions to this sphere alone was absurd. The church had been instituted by God to exist for the whole world. It was to speak into the world and to be a voice in the world, so it had an obligation to speak out against things that did not affect it directly. (p. 280)

“At the end of the day I can only ask God to give a merciful judgement on today and all its decisions. It is now in his hand.” — Dietrich Bonhoeffer

The prolific writing of people during Bonhoeffer’s lifetime enables us to get to know them far better than we often know people today. Sure, our generation often reveals far too much superficial information about ourselves online, but rarely do people have the discipline to express their innermost thoughts, longings, struggles, and emotions through the written word, as did Bonhoeffer and his contemporaries. Metaxas copiously integrates many of these letters into his story of Bonhoeffer’s life.

It’s hard to summarize how fervently Bonhoeffer lived his faith, and strived incessantly to know God more intimately. It wasn’t something he did, it was who he was. Studying Scripture and praying were not religious habits he strived to do on a regular basis, they were a way of life for him. Perhaps the best way to give a sense for Bonhoeffer himself is through his own words. I end with just a few of my favorite Bonhoeffer quotes from the book.

Talks By The Author