Our visit to Disneyland had finally come. We aren’t Disney fanatics, but wanted our kids to experience the park at least once growing up. Arriving the day before, and taking the obligatory swim in the hotel pool, we headed for an evening stroll through Disney Downtown to get a feel for the Disney magic before hitting the park in earnest the following day.

It was a short walk to the entrance, passing hotel after touristy hotel down the busy street, one family amongst dozens, all headed in the same direction. Our parent radar was up, ensuring the kids kept pace.

“Get your ears here. Only $5. You’ll pay $15 inside the park!” the jovial street vendor warned. Time was short and I wanted to see the park. We bustled past a man holding a homemade cardboard sign, asking for assistance and wishing all passers by God’s blessing. The gates were within sight. “Heads down! Stay focused! Come on!” I pleaded with the family.

It was fair warning for what we’d be enduring the next day.

As the Disney music filled the air, we made our way under street lamps through the downtown shopping area. There were families everywhere, battling with overly tired and overly stimulated kids, strollers full of Disney and Star Wars trinkets. It was fair warning for what we’d be enduring the next day. A juggler performed for a sizable crowd; further down a jazz band was taking the stage for a nightcap performance.

We enjoyed window shopping, ducking in and out of a handful of interesting stores. In the back of my mind I kept hearing that great Spaceballs line, “Merchandising, merchandising, where the real money from the movie is made…. Spaceballs—the breakfast cereal. Spaceballs—the flame thrower!”

Then it was time for the reverse trip, back to the hotel, to make sure we were ready and rested for the big day. A military vet and his son were asking for handouts, and the familiar street vendors were repeating their same spiel. 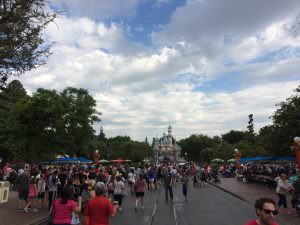 Getting the whole family to sleep in the same hotel room isn’t easy. Sprinkle in the anticipation of a fun outing the next day, and we weren’t sure anyone was going to sleep.

With the lights off and hotel air conditioning on full blast, our eldest stumbled through the dark and wanted to talk, clearly troubled. My wife ushered him into the bathroom so she could turn on a light without waking the others. Through moist eyes, he poured out his heart.

“It isn’t fair. How can there be people without a place to sleep, begging on the street, while everyone’s spending hundreds of dollars to get into Disneyland?”

Platitudes and nuanced answers weren’t going to suffice. I wasn’t able to hear my wife’s answer, but prayed she’d have wisdom to respond.

Nothing more was said, but I was convicted.

The next morning, we slathered ourselves in sunscreen, threw on our backpacks, and walked the same route back to the park entrance. This time, our son was armed with packs of food to distribute to those asking for help.

As we passed each person with a sign, he silently walked over, gave them a package of cheese and crackers, and rejoined the masses headed for the gates. Eventually his food stash was empty and we were at the entrance.

Nothing more was said, but I was convicted.

How had my heart become so calloused that I could walk right by and not feel pain? Why was my first instinct to avoid eye contact with those along the street? Why did I question the motives of those asking for help? When did I learn to rationalize a lack of response?

On this trip it wasn’t the magical world of Disney’s kingdom that captured my heart, but the eyes and heart of my son, demonstrating to me true faith and humility.