“Should we get a dog?” We’d been married for a few years. I’d loved our family dog growing up, so it seemed natural to me. And yet, I was hesitant. The main reason I gave for not wanting a dog was the fear of having to one day say good-bye. 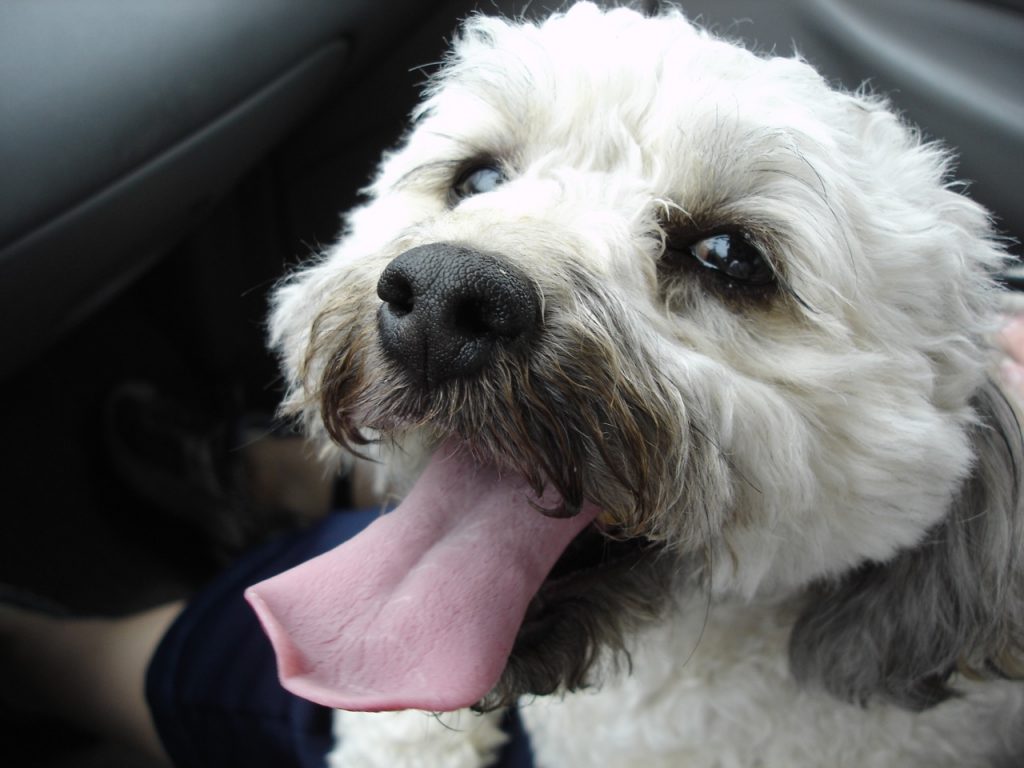 We got Moby in 2001 as a puppy. Years before we had any children, he solidified his place in our family. On Friday, we gathered as a family to say good-bye. He was having repeated heart failure episodes, and unable to breathe.

I expected it to be hard, but not this painful. Looking back at all of our memories, it’s easy to see why. Do you mind if I share a few?

When he was first eating food from a dish, he was top-heavy. When he’d lean over his bowl to eat, his head would weigh him down and he’d do a face plant into his food.

About the same age, he would spend the night in a crate to help with his house training. Each morning after breakfast he’d head straight to the crate, open the door, and pull out his blanket in protest.

When we first met Moby, he was fully black, with a splash of tan just around his eyes. His coloring was beautiful, and he seemed to lighten a bit as he grew. Then came his first haircut. The black coat was shed with his first grooming, only the black tips remaining. Everywhere else he was now a beige color.

Speaking of haircuts, the first time we brought him to the groomers they asked if we wanted his head rounded. Fearing he’d end up with a military-style flat top, we said yes. As it turns out, they sculpted his head into this huge helmet-shaped dome. When he came home, you could literally see the disgust on his face as we couldn’t stop laughing. Since he was part poodle, the groomers had shaped his head like a traditional poodle. We didn’t make that mistake again.

To demonstrate his fierceness, Moby would plan sneak attacks on the flowers in the yard. Seriously, they never saw it coming. He was also afraid of house flies. You could always tell when there was a fly in the house, as he’d be cowering, tail between his legs, looking for a place to hide.

Being small in stature, Moby somehow managed to make descending a single step something of an occasion. Instead of stepping down from one level to the next, he would launch himself off the step with all four paws in the air. While taking a walk one day, going off the curb to cross the street, Moby did his usual leap. A stranger saw it from across the street and yelled over to us that it was the cutest thing he’d ever seen.

Speaking of walks, Moby loved the smells of the outdoors. Whenever he came across something good smelling (think geese poop, dried worms, rabbit pellets), he would lower one shoulder and attempt to roll in it. When he wasn’t shoulder-diving into something nasty, he would position himself right between us. He’d look around as if to say, “That’s right. We’re out on a walk, folks.”

In our first house he wasn’t tall enough to see out the front window, but he wanted to keep an eye out for squirrels. To get around this he used a begging posture he’d learned as a trick to elevate his view. He’d sit on his back haunches and balance with his front paws up in the air. That gave him just enough height to keep an eye on Squirrel in the front tree. They frequently had stare-downs.

Speaking of houses, Moby was with us through every major life change: changing jobs, the family expanding, and moving 6 different times. During one move, we had a 13 hour drive between states. Moby spent the entire drive standing so he could keep an eye on things and provide input as needed.

Before we had kids, we’d occasionally eat something while watching TV. During a meal of Macaroni and Cheese, Moby thought he could crawl on his belly on the floor between us and the couch, come out between us, and get our food. This became the Moby Macaroni Maneuver.

Speaking of couches, when Moby was excited about getting a treat he would climb onto the back of the couch and leap off. It was part of his pre-treat routine. That carried over into other aspects of life, when he just wanted to hang out with us, too. Thinking he was part cat, he’d hang out on the back of the couch.

Speaking of other kinds of animals, his favorite toy of all time was a squeaky crab. He’d take a hold of it with his mouth and shake it for all he was worth–over, and over, and over, until he was convinced it was dead. Oddly enough, these toy crabs didn’t last long. For fear that Meijer would stop selling them, we eventually started stocking up to make sure he never ran out. We still have a couple to this day.

One of our favorite mannerisms of Moby’s was how he’d always tilt his head sideways when hearing his name. It was as if to say, “Yes, you called?” He did that faithfully until he lost his hearing late in life.

Speaking of health issues, he had abscessed teeth which had to be removed. He had a heart murmur that ultimately led to heart failure. He tore the ACL in his knee. The highlight had to be when he swallowed a corncob holder. At the age of 14 he had emergency surgery, and was good to go. The vet didn’t believe us and took x-rays to confirm he had actually swallowed the whole thing, spikes and all. While they were removing it, they also removed a huge hair ball from his stomach. Did I mention he sometimes acted like a cat?

He also had skin allergies his whole life, with various treatments not doing much to help (us giving him injections, special shampoos). At one point we had him wear a white wife-beater t-shirt to keep him from scratching himself raw. Even in his health issues, he made us smile. A few months before he died, his vet’s office even referred to him as a “perpetual pup,” always bringing a smile to your face.

Speaking of things we made him wear, every Christmas he donned a Santa hat and had to endure a photoshoot by the Christmas tree. He tolerated it, but his disdain was obvious.

Speaking of winter, Moby loved the snow and cold more than heat. There were times he’d have to burrow through the snow it was so deep. At the other end of the temperature spectrum, when it was hot while taking walks Moby would wait until we were passing a patch of shade and would plop down in the lawn. He’d pant and smile at us, tail wagging. He’d refuse to go on.

When we were saying our final good-bye to Moby, my wife used this as an analogy with the kids. She explained that his body was shutting down, and didn’t want to go on any further. I immediately pictured him sprawled on the green grass with the tongue flapping.

Speaking of snacks, we didn’t often (intentionally) give him people food. That didn’t stop him from trying to get some, however. One infamous tale is when he ate my mother-in-law’s special Dutch dried beef, and chewed off the corner of a recently autographed book. In Moby’s defense, they were sitting on the floor together, as if to say “eat me.” To this day, I think that was the only book he ever chewed.

My mother would frequently spoil him with treats and snacks. “These eggs are good for his coat” she’d say. We tried to be firm, but secretly enjoyed seeing him spoiled. On Sunday mornings, when I made eggs for the family, he’d be there beside me hoping for a drop of shredded cheese, or ham, or anything. He seemed to know when it was Sunday morning before I entered the kitchen.

He was quite adept at eating apples. He would gently nibble the apple off the core, and knew not to dig too deep. When he was younger, he’d help lick out yogurt containers after we were through. His entire face would be hidden inside the small carton. It was quite adorable.

We often said Moby was a pup of routines. (I have no idea where he got that from.) If I didn’t wake up early enough in the morning, he’d scratch at the side of the bed to wake me up. Later in life, when he could no longer climb stairs, he’d smell the coffee first thing in the morning, timed to brew the same time I’d wake up. He’d be up and watching for me to come down the stairs, the first to greet me every day.

At night, after we got the kids in bed, he’d be standing in the kitchen waiting for us to come down. It was his favorite time of day, when he had us all to himself. He’d attempt to share our popcorn, or have a treat of his own. We’d sit on the floor together and read or watch a show, and he’d snuggle in or stand in front of me until he received a sufficient amount of attention.

Speaking of nighttime attention, for most of his life Moby slept in our bedroom. As we’d settle into bed, he’d come to my side of the bed, sit down, look up at me, and wait for me to give him a good scratching. It was his pre-bedtime massage, I guess. Many nights I was tired, or cold and wanting to stay under the covers, but then he’d look up at me with those big brown eyes. How could I resist?

Everywhere I go in the house now, I’m faced with the thought, “Moby would have been right here with me when I’d do this.”

My sadness now could have been avoided had we never gotten Moby. But the level of pain demonstrates the absolute joy he brought to our lives, and I wouldn’t trade that for anything.

Rest well, Moby. You enriched our lives more than you’ll ever know.

7 thoughts on “Measure of a Faithful Friend”